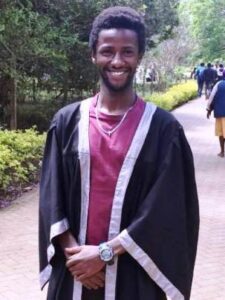 History: Robert, together with his brother (Dennis Kinyanjui) and sister (Miracle Njeri) joined Huruma Children’s Home-Ngong in the year 1999. This was after the death of their mother who was a single mother. At the time Robert was 4 years, his brother and sister were 3 years old and 6 months old respectively. They all grew in the home.
Education: He undertook his primary and secondary studies at the Ngong Huruma Primary & Secondary Schools; sat for KCSE in the year 2013. Later, enrolled at the Jomo Kenyatta University of Agriculture and Technology and graduated with Diploma in Information Technology; currently (as at 2021) pursuing BSc in Information Technology at the same University.