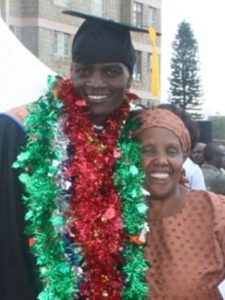 History: He was referred to us by the community in 1990 when their mother died. He and his older siblings were neglected by their relatives who after only 4 months of their mother’s death brought them to Huruma. David was only 2 years old when he lost his mother.
Education: He undertook his primary studies at the Ngong Huruma Primary School and later his secondary studies at the Oloolua Secondary School. He later got enrolled at the GRETSA University under sponsorship of Huruma Trust Fund where he graduated in 2012 with BA in Business (Accounting). He is also a Certified Public Accountants (CPA-K) Finalist and also holds a masters certificate of MA in Tax and Customs Administration from the Moi University (graduated in 2019) both of which were self-sponsored.
Occupation: Self-employed in an Accounting firm he co-founded with a business associate.